German painter, sculptor, graphic artist, poet and one of the key figures in Surrealism and the Dada movement.

Ernst’s father was a teacher at a school for deaf children and an amateur artist. That is why, under his guidance, Max started painting at an early age. From the outset, Max was an impressionable child and fancied going to the forest with his father. In 1906, Ernst’s younger sister was born. That same day, his beloved parrot died. The timing of these two events struck the teenager, and he decided that his small sister had taken the life of the bird. From that point on, the artist repeatedly portrayed people in the form of birds.

In addition to painting, he studied philosophy, literature, psychology and art history at the University of Bonn. Inspired by the statements of French poet Lautreamont about the meeting of a sewing machine and an umbrella on the anatomical table, Ernst began experimenting with various techniques. He combined materials such as fragments from illustrated books, advertising catalogs and user manuals. Items taken out of the context were transformed into new realities. It is believed that the invention of the collage technique by Ernst had a significant impact on the aesthetics of the Dada movement.

Ernst’s talent allowed him to create his own specific world of dreams and fantasies. He was a trendsetter in 20th century American art, thanks to brilliant and extraordinary ideas that differed significantly from those of his contemporaries.

– For Ernst, the collage technique was one of the ways to respond to the world situation of 1919. “I tried to see the development of the unexpected meeting of two distant realities on an inappropriate plan in collage,” he wrote.

– The collages of Ernst are somewhat similar to poetry. He said: “… the technique of collage is the systematic exploitation of the random or artificially provoked connection of two or more alien realities in an environment that is clearly inappropriate for them, and a spark of poetry that flares up as these realities approach.”

– The inclination of Dadaists to deploy secret signs and symbols is reflected in Ernst’s paintings. Like other Dadaists, he preferred “anti-art”, thereby expressing his protest against the values ​​of pre-war life and militaristic ideology.

Ernst’s first works were shown at the Feldman Gallery in Cologne. That year, the artist wrote several articles for the magazine “Der Volksmund”, in which he defended the ideals of the Young Rhineland. In them, he mocked artistic critics who used the c 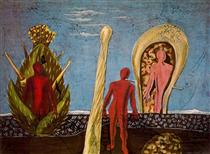 Ernst, together with artist Johann Baargeld, tried to organize a Dadaist exhibition. They were going to present their own paintings, works of painter Otto Freundlich, as well as those by amateur artists and residents of psychiatric hospitals. However, their plan failed. Posters and catalogs of the exhibition were confiscated by the occupying British authorities. 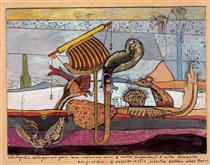 Ernst had a personal exhibition in Paris at the gallery “Au Sans Pareil”. Its opening was attended by a large representation of Dadaists. Max Ernst himself could not come, as he had not received a French visa. The exhibition had a big resonance and was visited by various representatives of the Parisian intelligentsia. Notes about it appeared in many magazines. However, the artist said that the event did not bring any personal benefit to him. 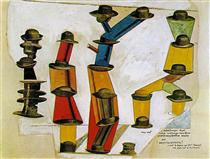 Ernst was arrested as a supporter of an enemy country. He spent six weeks at a pre-trial detention center in Largentière. Then he was transferred to Camp des Milles, a French internment camp (Aix-en-Provence). There he shared a room with artist Hans Bellmer, who painted his portrait. Bellmer portrayed the face of Max Ernst as a brick wall. At the end of the year, Ernst was released with the help of the Minister of the Interior. 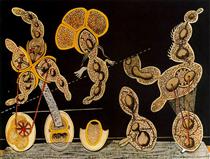 A large retrospective exhibition of paintings by Ernst was held at the Solomon Guggenheim Museum in New York and at the National Gallery of the Grand Palais in Paris.