An Austrian painter and graphic artist, one of the most prominent representatives of Expressionism.

Egon’s father was a railway worker. From childhood, the boy was fond of drawing, depicting railway tracks, stations and the surrounding areas of ​​his native town. In 1904, the family moved to the outskirts of Vienna, where his father soon died. After his death, his uncle, Leopold Chihachek, brought up Egon.

The powerful images of Egon Schiele that destroyed the idea of ​​traditional beauty made him one of the most famous artists of the early twentieth century. In addition to the emotional portraits of stunning emotional emotion, Schiele is famous as an extraordinary person. By his extremely frank works and independent lifestyle, he challenged society and became almost as famous as his outstanding teacher Gustav Klimt. Only the tragic early death, interrupting his creative path, prevented Egon Schiele from becoming the most prominent contemporary artist and making a revolution in European art.

– The main idea of ​​Egon Schiele’s creativity, permeating all his art, is life and death, their endless change and reincarnation. This theme, one way or another, is present in his many self-portraits, allegorical canvases, and even landscapes. The artist depicts death, which follows a man in his footsteps, accompanying him from birth to the inevitable end. This is most clearly expressed in the paintings “Dead Mother” (1910) and “Girl and Death” (1915), which is one of the most famous works of the author.

– The style of the artist, who first borrowed many methods from his teacher Gustav Klimt, became brightly individual and extremely original when the artist was 18. Egon Schiele was a very talented draftsman; his sketches are almost more valuable than his large-scale oil paintings.
– Schiele’s works are recognizable thanks to a tough, broken line that outlines the body of a man, his face and his hands without unnecessary details. Pictures of people carry a strong emotional message and a frank sexual nature, which caused shock and at the same time genuine interest in society.

– Schiele’s color palette, unlike of his expressionist colleagues, is not distinguished by great saturation and contrast of color ratios. The artist uses mostly warm, muted colors: brown, gray, cherry red, dark green. Their shades make up an earthy palette that evokes a pessimistic mood, symbolizing wilting, smoldering and death.

– Separate consideration is deserved by self-portraits of the artist, which were countless. Egon Schiele painted about 300 his own images, being in this sense, probably, the record-breaker among the artists of all time. Most of them are pencil or watercolor sketches depicting the artist in various poses and mental states. In most of the drawings, Schiele imagines himself painfully thin, anxious and depressed, with knotty nervous hands and a tense facial expression. The most famous is his painting “Family”, where the artist depicted himself, his wife and their unborn child a few days before their death from the epidemic of the Spanish plague. 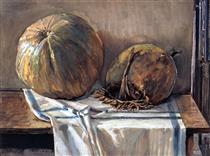 Entered the School of Arts and Crafts in Vienna

Entered the School of Arts and Crafts in Vienna. During the first year, at the insistence of several teachers, he transferred to the Academy of Arts in Vienna. At the Academy, he studied painting and drawing, in which he showed great talent. From the first years of study, he showed dissatisfaction with the conservatism of the school and the majority of teachers.

He showed his drawings to respected and influential artist Gustav Klimt, who positively assessed his work, seeing a great talent in him. Klimt bought several drawings from the young artist and gradually became his mentor and patron. Thanks to his influential teacher, Schiele got a place at the Vienna art workshops and met many potential buyers of paintings.

Took part in an exhibition in the Klosterneuburg

Took part in an exhibition in the Klosterneuburg suburb of Vienna. Works that did not comply with the canons of the Academy and promoted a completely new art were demonstrated. 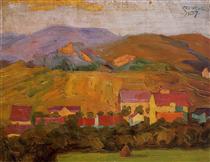 Schiele left the educational institution and organized the New Art Group association with several equally dissatisfied students. At that time, the artist’s individual style was formed – sharper, bolder and gloomier compared with the works of the luxurious and decorative Art Nouveau that dominated at that time. Despite the fact that Schiele completely departed from the style of Klimt, he remained in excellent relations with his teacher until his death.

The first personal exhibition of the artist

The first personal exhibition of the artist was held in Vienna. Gradually, the work of young Schiele became popular, attracting the attention of the public with its frankness and emotionality. In the same year, the artist met a seventeen-year-old Valerie (Wally) Nosil, who previously was Klimt’s model. Valerie became his permanent model and lover, followed him to the small town of Český-Krumlov in the south of Bohemia.

Schiele was drafted into the army

Got acquainted with the sisters Harms, who lived next door. Soon the artist married one of them – Edith, despite the protests of her parents. A few days after the wedding, Schiele was drafted into the army, became a member of the First World War. In the army, the artist was treated condescendingly. He performed simple duties including the protection of prisoners of war and continued to draw. Schiele’s works changed in the direction of more balanced and realistic painting; his art became more mature and deep.

The artist created a large number of works

After finishing the military service, he returned to Vienna with the aim of concentrating on his artistic career. The artist created a large number of works that were distinguished due to his talent and bright individual style. After the death of Klimt, Schiele became the most famous and influential Art Nouveau artist of Austria.

Took part in the 49th exhibition of the Secession, where his work was a great success. The artist received many orders for portraits, and his work constantly grew in price. In the autumn of the same year, the pregnant wife of the artist got the Spanish flu and died; three days later, on October 31, the artist died from the same illness, having managed to paint the stunning in its emotional expressiveness portrait “Family”, which is considered one of the best paintings in his heritage.