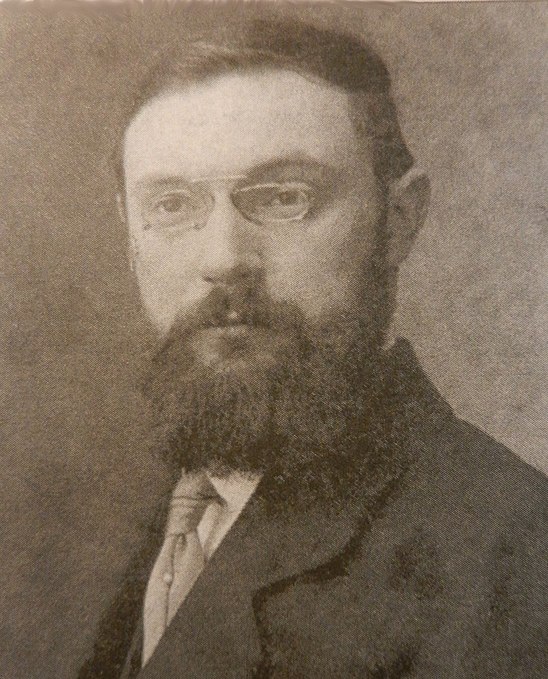 A Belgian painter and draftsman, lithographer and illustrator.

Frits van den Berghe was one of the most interesting Expressionist artists of the first half of the twentieth century and a prominent Surrealist. Starting his career under the influence of Symbolist artists and Lumists grouped in Laethem-Saint-Martin, he wrote a manifesto together with his friend, artist Gustave De Smet, who opposed Impressionism. As a member of the second wave of Laethem-Saint-Martin school, Berghe followed the latest trends in the visual arts of his country.

The time of the First World War, a period of existential doubts when the artist lived in the Netherlands, was marked by his fascination with Cubist painting by French artist Henri Le Focognier, as well as an interest in Futurism and German Expressionism.

At the end of the 1920s, having visited an exhibition, where, in particular, paintings of Ernst and Miro were exhibited, the artist moved away from other styles and devoted his art to attempts to overcome the barriers between real and irrational phenomena, life and death. Berge revealed his new surrealistic concept, in particular, in a theme that was original for this style – floral still lifes.

Although Berghe’s paintings often resemble works of Ernst and Ensor; his creations are the original Flemish version of Surrealism, with its great picturesqueness and expression. Berghe’s works (the list of works, compiled in 1966, consists of 430 items) are presented in most Belgian museums and galleries in Europe.

– Fritz Berghe, whose upbringing was academic and versatile, began his career in painting from a compromise between Symbolism and Impressionism – working in the open air in the village of Sint-Martens-Latem near Ghent, he chose light colours for his paintings, used double meanings in the plots.

– Under the influence of his old friend, artist Gustave de Smet, Berghe started painting in the style of expressionism – mostly gloomy and pessimistic canvases characterized by a simplified and rather heavy style. Later, actively participating in the movement of Flemish Expressionism, he created unusually flexible, soft and warm colours.

– Escaping the war in Holland, the artist started working in the styles of cubism and futurism, and his works (those were numerous woodcuts and linocuts) became lighter in texture, with more attention to the problem of building space – this task prevails over expressiveness.

– The slight humor and freshness of the village atmosphere in the late period of his creative career gradually gave way to anxiety, almost surreal eroticism and hallucinations.

– His city plots got not even a satirical but sarcastic spirit. In these paintings, there is often chaos and the psychological complexity of mankind, its evolution, rise and fall. The artist often expressed his thoughts by creating floral still lifes where rough forms of plants (mushrooms, polyps, grimacing flowers and human figures) are in different stages of transformation, sometimes very close to the stage of degeneration or decomposition. The meaning of his paintings concerns the world of subconscious than reality. The city usually present in the background is empty and runs the risk of being captured by this rampant growth of strange vegetation. 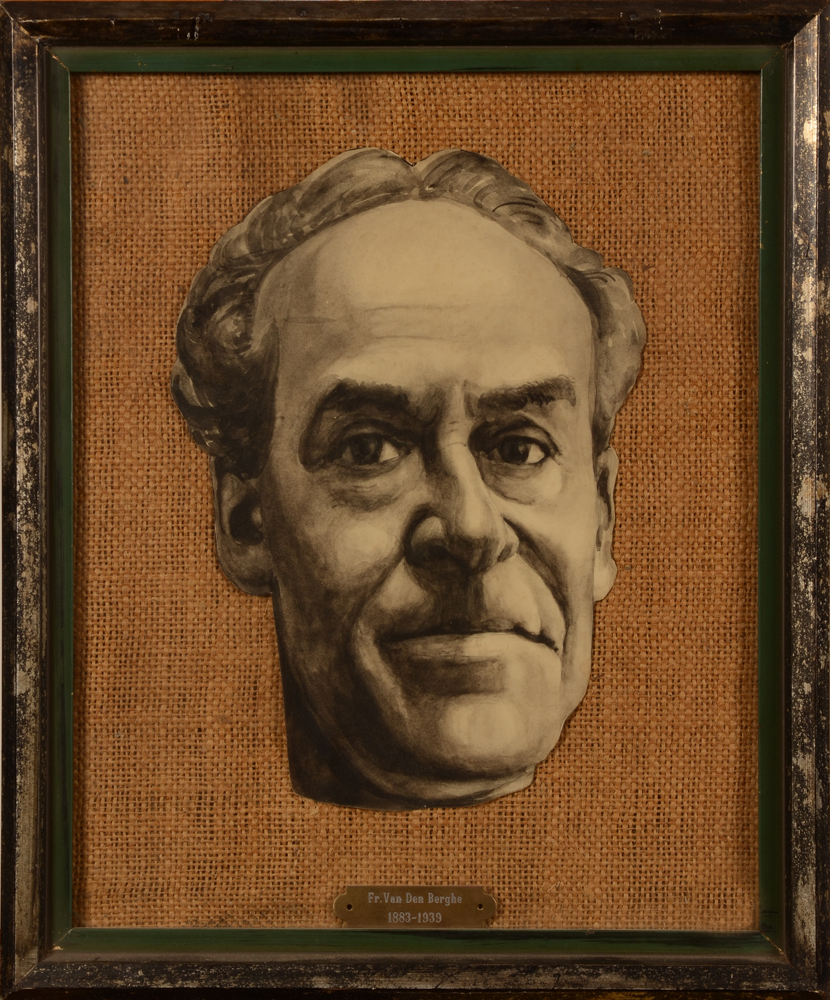 Studied at the Academy of Fine Arts in Ghent 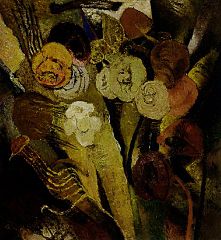 Studied at the Academy of Fine Arts in Ghent under the supervision of J. Delvin, where A. Servaes and De Smet were among his classmates. The life and creative path of Fritz interacted the life of the latter until 1926. 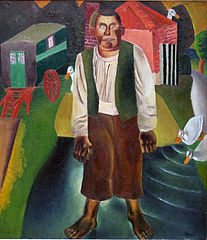 He lived and worked intermittently until 1914 in the Flemish town of Sint-Martens-Lath near Ghent, where the famous art school-colony of painters was founded.

He got to know the art of Impressionist Emile Claus 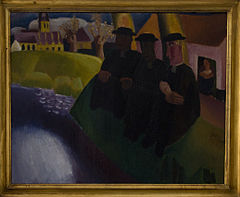 In Ghent, he got to know the art of Impressionist Emile Claus, who considerably influenced the early works of the artist. Became friends with Permeke, who was his colleague and like-minded person for many years.

He was appointed a professor of painting at the Ghent Academy 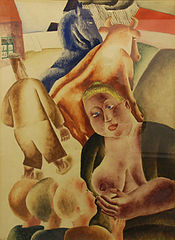 He was appointed a professor of painting at the Ghent Academy. Soon he refused from this position to go to the USA, where he spent a few months (the trip greatly disappointed the artist). The painter saved himself from the war by living with Gustave de Smet. Berghe became interested in German Expressionists under the influence of his friend. 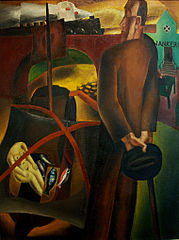 Returned to Belgium. At first, he lived with de Smet and Permeke in Ostend. The central theme of his work during that period was a naked female body; the mood of his paintings was extremely optimistic. 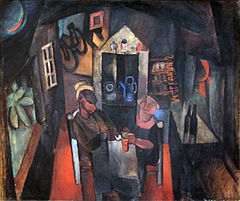 Moved to Ghent, where he soon came under the artistic influence of Surrealism. Close contacts with art dealers Van Hecke and De Ridder and the magazine «Sélection» allowed the artist to live comfortably and not worry about money. Participation in exhibitions in Belgium and abroad made the artist famous. 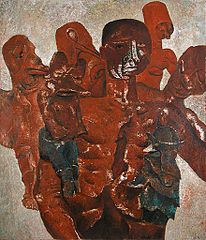 There was a change in the style and theme of the master’s works: he went far from Realism and Expressionism under the influence of Surrealistic works of Magritte, Arp and Ernst. Not only the possibility of unique self-expression but also the free technique of painting and drawing attracted Berghe. 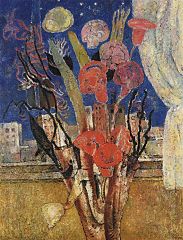 Twenty-five of the artist’s paintings were exhibited at the Galerie in L’Epoque (Brussels) and became a demonstration of the artist’s new orientation, aimed at visualizing fantastic and bizarre associations and images.

Created a large number of caricatures and comics 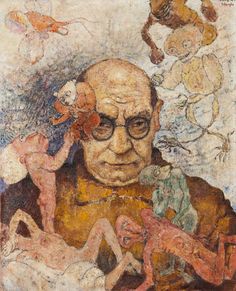 The closure of the galleries in Brussels due to the crisis had negative consequences for Berghe as a painter. However, he, who was forced to become an illustrator in the socialist daily “Top”, created a large number of caricatures and comics, which made up a significant part of his creative legacy.