A German avant-garde artist, illustrator and teacher who worked in America. Richard Lindner worked in his own unique style, called “mechanical cubism” for the unusual combination of a human figure with elements of various machines in his paintings. A successful commercial artist, Lindner began to create paintings at the age of forty and managed to achieve great popularity and recognition in this area. His paintings were awarded several prestigious prizes, and his personal exhibitions were regularly held throughout Europe and the United States, where he emigrated after the outbreak of World War II. Being a vivid and true reflection of the era, the work of Richard Lindner served as the basis for the emergence and development of new styles in American art, in particular pop art, which became one of the main art movements in the country in the middle of the twentieth century.

– The individual style of Richard Lindner is a unique combination of the elegance of the European modernist tradition with the vibrant and dynamic art of America after the middle of the 20th century. His paintings, reflecting the loneliness and inner emptiness of a modern man, carry a strong emotional charge and leave a feeling of existential alienation.

– The central object of the artist’s paintings is a woman whom Lindner represents as a dominant, imperious, ruthless machine, attracting with her open sexuality and repelling with her indifference and cruelty. Men also often appear in the artist’s paintings, indicating problematic relationships between the sexes, grotesquely depicted children and animals. Each figure can be considered as a specific symbol, clearly illustrating a particular social phenomenon.

– Sharp lines and vibrant colours characterize the typical paintings of the artist. Partially similar to a collage, Lindner’s paintings most often consist of separate parts, which form a whole picture in mind and create a recognizable image. The artist often includes numbers and letters in his works, objects similar to clippings from magazines that do not harmonize in structure with the rest of the canvas.

– Most of Richard Lindner’s paintings are autobiographical; they seem to take the viewer into the atmosphere of Berlin of the 1920s and 1930s, which echoes the American culture of the 1950s and 1960s. He depicts the motives of his past and puts them in the atmosphere of a modern metropolis. Once the artist said, “I am juggling with the past. I draw postcards from the summer resort of my past.”

– The theme of the work of the painter is dictated by life itself. He snatched scenes from New York’s everyday life, such as talking in a telephone box, riding public transport or walking around the city, and transferred them to the canvas, styling and adding some details. In the artist’s interpretation, familiar scenes acquire a completely different sound, revealing the true essence of things and showing the real face of a city, country and nation.

Richard Lindner was born on November 11 in Hamburg. His mother, Mina Lindner, was an American of German descent and was born in New York. A few years later, the family moved to Nuremberg, where Richard studied painting at the City School of Arts and Crafts. An important person in the life of the artist was his sister Lizzie, seven years older than he and a former talented opera singer. The death of his sister at the age of 21 was a big loss for young Lindner.

Became a student at the Munich Academy of Arts 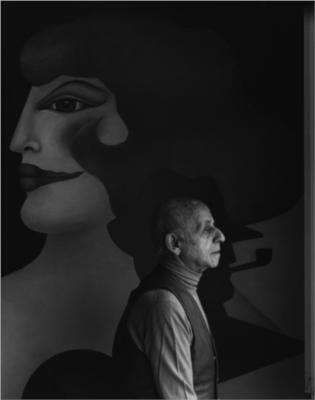 Became a student at the Munich Academy of Arts. He participated in various toy design and tobacco advertising competitions and won first places in many of them.

The artist settled in Berlin

The artist settled in Berlin, worked as an illustrator for several magazines, was engaged in commercial design; the next year, he moved to Munich, where he was offered a post of art director of a publishing company. 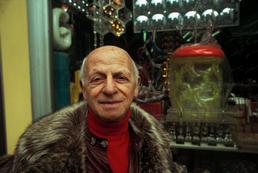 The artist married Elsbeth Schülein, an artist from Nuremberg. He had lived in Germany before the rise of the National Socialists when due to increasing pressure on people of Jewish origin he was forced to move to Paris in 1933.

Lindner was assigned to forced service in Brittany

The commercial success of the emigrant artist in Paris was not as great as in his homeland. He was engaged in the creation of advertising posters and postcards. After the outbreak of the war, Lindner and his wife were interned as German citizens. Lindner was assigned to forced service in Brittany, and Elisbeth managed to emigrate through Casablanca to New York in 1940.

Moved to New York. In the USA, Lindner quickly became known as a successful artist, a master of advertising design. He met many American colleagues and became a close friend of S. Steinberg. The artist divorced his wife and applied for American citizenship, which he received in 1948. In America, Lindner began to paint seriously, paying great attention to human psychology and social aspects. 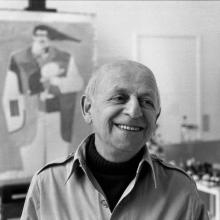 Visited Paris, where he studied contemporary art. Cubists, in particular, F. Leger, mostly influenced his style of work. The painting “Meeting”, which he created in 1953, became one of his most famous paintings. The first solo exhibition of Richard Lindner was held at the Betty Parsons gallery in 1954.

His work received wide acclaim in the United States

Created a large number of paintings in his recognizable and bright style. The artist was also engaged in teaching and became an assistant professor in the art department at one of the most prestigious and influential educational institutions in the field of art – the Pratt Institute in New York. His work received wide acclaim in the United States and international recognition. Lindner’s solo exhibitions were held in London and Paris in 1962 and 1965. Having completed his teaching career at the Pratt Institute in 1966, the artist focused entirely on painting.

In 1972, he was elected a member of the American Academy of Art and Literature. He received several prizes and became an incredibly famous and financially successful painter. In 1974, the National Museum of Contemporary Art held a retrospective exhibition of the paintings by Richard Lindner in Paris. The exhibition also visited several German cities and Vienna. In 1977, the last large retrospective exhibition of the artist was held at the Chicago Museum of Modern Art. 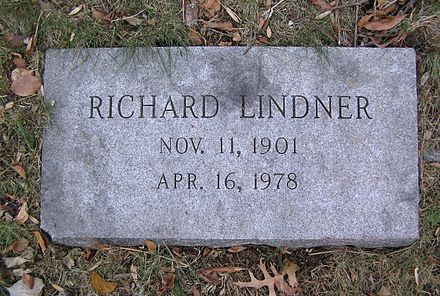 Richard Lindner died on April 16 of a heart attack in his apartment in New York.

Thank You Thank You