A Ukrainian self-taught painter, who in five years painted her whole house (seven rooms) including ceilings, doors, a stove, all the outbuildings, fences, and gates. The elderly artist who worked in the style of naive art is rightly placed on a par with such Ukrainian amateur artists as Maria Primachenko, Tatyana Pat, Ekaterina Bilokur, and Anna Sobachko-Shostak. At the same time, Polina Rayko’s naive painting is special, closer to outsider art. A few TV programmes about her were made; in 2005 the catalog of her paintings “The Road to Paradise” was released in Ukrainian and English. An exhibition of photographs of the wall painting by the naive artist with great resonance was held at the national center of folk culture “The Museum of Ivan Gonchar”. The house of the artist in Oleshki is now protected by the Law of Ukraine “On the Protection of Cultural Heritage”.

– Not having any art education and not being interested in arts, the 70-year-old woman started painting, running away from loneliness. The figurative system of the artist gradually started including Christian, contemporary Soviet and ancient pagan symbolics. When painting her empty house (she lost her husband and children), the summer kitchen, gates, fences and garage doors, she used the simplest and cheapest paints – PF household enamel. Polina Andreevna reproduced her tragic biography, depicted her relatives, home pets and exotic animals (sometimes fantastic), nature and various ornaments.

– According to local historian Sergey Dyachenko, who closely communicated with Polina Rayko in the last years of her life, the artist usually painted at night. Having closed the shutters of all the windows so that her strange (in the opinion of most of her neighbors) passion was not visible from the street, she began to paint by the light of a light bulb. She painted, sang songs and cried, because the plots were associated with the hard experiences of her life.

– The artist said that she found some plots on labels, wrappers and envelopes, while some others “came” to her in dreams. For example, the idea of ​​the so-called “Statue of Liberty” (or “Captain”) is a kind of obelisk with a high pedestal and the inscriptions “1941-1945” and “May 9”, resembling a greeting card. However, the artist’s fantasy gives a woman in a military uniform wings instead of hands. One night she saw a military nurse in her dream – in the morning she started painting her also with angel’s wings, but not white. The artist also painted from memory – she rather precisely depicted a local church.

– Raiko’s paintings are similar to monumentalism – her amazing “leopards” (looking like whether owls or cats), whose height extends to the length of the whole wall from the floor to the ceiling. The fish is no less huge. The artist had the courage of a broad brushstroke, intuitive harmony in the selection of colors, a wonderful sense of rhythm – she used circular molding in the middle of space when creating ornaments on the floor consisting of twigs, swallows and butterflies.

– Polina’s compositions are philosophical and optimistic (except, perhaps, a toothy predator with black plumage that occasionally appears in different places and which always kills snow-white birds). Her main advantage admired by art connoisseurs and ordinary visitors of the house-museum is the depth of worries, frankness and intimacy of motives – this is all that is characteristic of the naïve art itself and what turns paintings of non-professionals into masterpieces.

Pelageya was born into the peasant family of Soldatovs in Tsyurupinsk (now Oleshki) in the Kherson region in April (in her passport, the 15th of May is written as her birthday). She was the youngest. Also, there were three daughters and two sons in the family.

Ыhe was forcefully sent to Germany 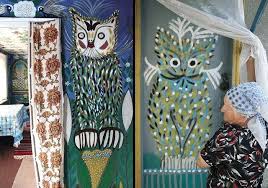 When Polina Soldatova was very young, she was forcefully sent to Germany. Later she always felt pain remembering the war, as she saw both executions and sufferings of prisoners. The themes of the war were present in her wall paintings; however, they were shown as a victory in her light interpretation. Her father died at the war. 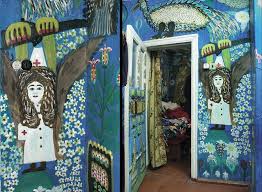 She married Nikolay Alekseevich Rayko. They lived mainly thanks to the harvest from their own vegetable garden and farm, occasionally earning money during the season farm works, or working for some people. They got children: daughter Elena in 1951 and son Sergei in 1953; the family build a new house on the bank of the Dnipro river, on the outskirts of the small town of Tsurupinsk (now the historical name of Oleshki has been returned).

Her daughter Elena died in a car accident

Her daughter Elena died in a car accident, leaving two grandsons of Polina Andreevna with her husband (they were little interested in the life of their grandmother); the following year, Pelageya’s husband Nikolai died; her son Sergei who always initiated fights in their house and sold all their property for a bottle of vodka ended up at a penal colony. Despite her old age, she continued to go to work almost every day. 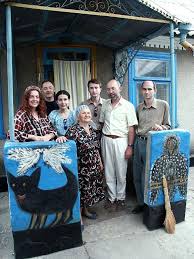 Her first unusual paintings appeared on the inner and outer doors of the house. The old woman used painting enamel PF for them. She took plots from everywhere: from her life, from fantasies and dreams, from the contemplation of nature – behind her garden, the Dnipro floods began, and from labels and calendars. 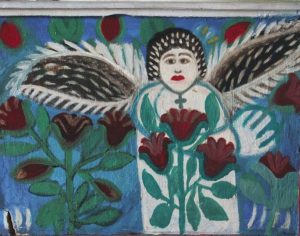 Returning from prison, her son Sergey hit his mother with a knife while he was drunk; soon he died from the liver cirrhosis. Having filled the entire space of 9 rooms (house and summer kitchen) and the surface of fences, gates, she started correcting some of her previously created paintings. Art historians and local historians began to come to her house; tourists (not only artists) went by buses to see her. In 2003, a short movie about her was made; there were her stories, ingenious explanations of the paintings and even singing that accompanied some narratives. 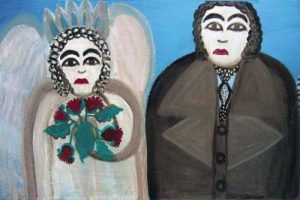 On the 15th of January, Pelageya Andreevna Soldatova-Rayko died. In 2005, the Kherson art group “Totem” and ethnographers published an extensive catalog of murals by Polina Rayko with the name she gave to one of her paintings – “The Road to Paradise”. In 2006, the documentary Paradise about the unique self-taught artist was presented. In 2013, the staff of the Kiev Museum of Ivan Gonchar filmed another story. The work on the creation of the first Ukrainian museum of naïve art based on the artist’s estate began. Soon after the death of Rayko one family couple from Canada, who were admirers of authentic art, purchased that estate. Thanks to them, the paintings were preserved.